In Memory of Helene Barcilon
by Linda Schlafman, using material taken from Joelle Norwood's tribute to her 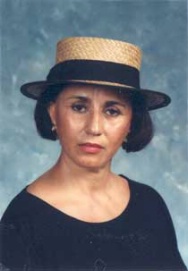 Helene Habiba Perez was born in Marrakech, Morocco during the Great Depression. She grew up in a loving home. Her daughter, Joelle, describes a life that, although monetarily humble, was rich with the love of a large extended family. As orthodox Jews, the family lived in the Mellah, the Jewish section of the city. Their lives revolved around the synagogue and the continual cycle of Jewish traditions and holidays. Joelle remembers her Mother was convinced that fifteen out of every thirty days were devoted to one celebration or another.

Helene married in her early twenties and had two children. As the political climate in Morocco deteriorated for Jews, the young family migrated to Canada. There, Helene began her teaching career and, after her divorce, eventually met and married Albert Barcilon whom Jolle describes as Helene's soul mate; they were a couple made in Hollywood. He loved showmanship as much as she, and they threw spectacular parties. He was the director and she was his star.

Madame Barcilon began teaching French at Sidwell Friends in the late '70's. She once half-joked that having been born in Morocco, she was the only real "African-American" teacher on the faculty. And what a teacher she was! It is was not enough for her to teach the French language. She taught French culture, not only of France, but also of the countries she knew best: Morocco and Canada. It was not unusual for one to be drawn to wonderful aromas emanating from her classroom. Following one's nose, one might come upon either crepes or couscous. And, Helene would be serving, dressed in a saucy chapeau or an elegant caftan!

In fact, Helene's costume became her calling card. In an era when middle-school students considered jeans or sweats to be cool, their beloved French teacher would welcome them wearing elegant skirts and spike heels. Once, having become frustrated with her students' lack of imagination where clothing was concerned, Helene tried an experiment. She wore the same black skirt and sweater, accessorizing them with a different belt, scarf, jewelry, or jacket each day. This went on for a month before her students figured out what she was doing, and when they did (the girls, at least) wanted lessons!

Helene would discuss style with her students, but she would not discuss her age. At one of her birthday celebrations, a student pressed her to tell him how old she was. When Helene demurred that she was at least old enough to be his mother, the young man exclaimed: "You don't look it; you must be using that stuff!" "What stuff do you mean?" Helene queried. He said, "Oh, you know: Oil of Delay!"

I wish Helene's retirement could have been delayed. It is clear that she did not look or act ready to leave the career she loved, but issues with Albert's health and her own dictated a retirement that, for Helene, would have been early at any age. Her last years were spent surrounded by the love of her children and beloved grandchildren Stephani and Jeremy. After the death of her dear Albert, her heart was literally broken and her strength waned. Helene Barcilon died too soon, but minions of admiring students and colleagues will hold her in their memory as the most marvelous Madame Barcilon.

OTHER TRIBUTES TO HELENE BARCILON

Ooh la la! I'll never forget that first day of seventh grade walking into Helene Barcilon's French class. She stood there as the epitome of womanhood - everything I wished I were and everything I was hoping to become. Sexy, smart, beautiful, fabulously dressed - absolutely dazzling. And then she opened her mouth and the French started rolling out and I was suddenly transformed into "Louise" and my classmates were Xavier and Collette. And we were mesmerized by Madame Barcilon from day one. Of course there was the wonderful teaching - meeting Monsieur and Madame Thibaut qui habitent Rue de la Gare a Paris and following this couple through three textbooks and many years of French study. There were the old fashioned static drawings of Monsieur and Madame Thibaut projected onto the walls of the classroom as we learned to manger, travailler, and of course, faire le shopping au magasin. (You can tell my French has really suffered over the years.) But honestly, what I remember most was Madame Barcilon's incredible sense of style. Those tight blouses! The fabulous scarves! Those impossibly high heels! The hip-hugging pants! All of us, the boys and girls alike, were energized by her looks and personality. French class was always a delight. We took a trip to Montreal and Toronto by bus in eighth grade. We ate French foods in the classroom, we read Le Petit Prince, we dreamed about going to Paris and eating those croissants aux chocolate and staying in a hotel with an actual concierge. I kept track of Helene over the years and was stunned to hear several years ago that she was sick. How could that be? No one who wears such great clothes and teaches with such inspiration could possibly become ill. She was always a bundle of energy and enthusiasm. I simply could not imagine that she had slowed down. While it is hard for me to picture her leaving this world, I imagine she did so with a Chanel scarf tied around her neck blowing in the wind, the stiletto heels on her tiny feet, her dark hair tightly pulled back in a low pony tail and a glass of great French wine in her hand as she pronounced over her shoulder, "A Bien Tot, mes enfants!" I know I'll see her again some day. I just hope there is a good concierge there.

Chic would be the first word to come to mind when describing our dear Madame Helene Barcilon. The perfection of her outward appearance was simply a manifestation of what she held dear: creativity with panache, exactness with joie de vivre, carefulness with esprit de corps, focused attention with elan.

The energy she brought to her French classes was astounding. What style, what flair! No simple memorizing and reciting. It was as close to immersion as one could get on 37th Street. And didn't the rest of the faculty love it when it was time for French cooking!

She was satisfied when students learned, respected her, the language, and each other. I remember one faculty meeting when we were all bemoaning the fact that the halls and classrooms were strewn with books and backpacks. She told us that in Morocco they revered books. They were handled gently and treated with respect. And that must have been her credo for teaching: handle gently and treat respectfully, and, oh, yes, throw in lots of joie de vivre.

Thank you, Helene, for being such a warm, effervescent and oh-so-stylish part of our lives.

My life as a francophile began early, with private lessons at age 7, reading Petit Nicholas and Le Balon Rouge, while my friend's mother chain smoked Marlboro Red cigarettes. I spent much of my childhood with my French friend and her family of European Community expatriates, and become accustomed to the bourgeois lifestyle of Parisian expatriates. I recall begging my mother for polo shirts with sweaters to match, hung over my shoulder in a way only the French can pull off. I wanted to transfer out of my elementary school to the Ecole Francaise. I tried desperately to master French cursive and to somehow fit a hyphen in my one-syllable name. To me, the French language and culture seemed normal and since my friends spoke it around the corner, it was just a matter of time before I became one of them. Then my friend and her family went back to Europe. My francophile ambitions were put on hold until I entered Mme. Barcilon's class.

At the awkward age of 12, I arrived at Sidwell Friends in 1988, hoping to find a comfort zone as soon as possible. Mme. Barcilon's class was that comfort zone for me, with a world of French language and culture I had missed since my younger years. She showed us how French colonialism influenced francophone nations, namely her native Morocco, and Senegal, Ivory Coast, Algeria, Guadeloupe, Martinique, Luxembourg, Switzerland. What was most thrilling, however, was that Helen introduced us to something far more important than the French language - we discovered the joy of French food! Assignments included mastering the French crepe, couscous and learning how to read a French menu. I reveled in her class, enjoying every lesson and activity. She told us of the hilarious pitfalls of her strong French accent - of trying to buy sheets, which sounded more like sh-t, or going to the beach, sounding like b-tch. Mme. Barcilon knew naughty language and food would catch our attention. She surely caught mine. She was also the only teacher I knew who could wear leather pants so well.

Later, after more years of French in high school and college thanks to Mme. Barcilon's training, I found my way to Aix-en-Provence to study abroad and then spent three years living in Paris working for an American firm. I traveled to Morocco and thought of Mme. as I ate delicious couscous and mint tea. After returning to the States and marrying a Frenchman, I admit to being a diehard francophile. I still think of her when I attempt to make crepes or couscous. While I learned something about style in France, I have yet to pull off those leather pants.

Mme. Barcilon was a class act, an inspirational teacher and une femme extraordinaire.

Like Marcel Proust and his madeleines, the mention of Madame Barcilon triggers a flood of recollections (many of them culinary) - croissant and chocolat chaud, "perfect" scores of "20/20," Moroccan tea ceremonies complete with cushions and Oriental carpets, and Toujours, Toujours, the life of the (fictional) famille Thibaut !

As Middle schoolers who started French in the fall of 1974, we were Mme. Barcilon's first class and thus had a special bond. She combined tremendous vitality, style (to our eyes, rarely wearing the same outfit twice), and inspired teaching, making the time spent with her a total immersion in French culture, as well as language. Who else would invite her husband, star Chef Albert, to school to demonstrate a recipe for crepes suzettes, with volumes measured in egg shells? Who else would regale us with tales of girlhood cycling in Morocco's Atlas Mountains, and meeting (retired) Winston Churchill, the "kind old gentleman" who gave her one of his paintings? Who else could rough it on a Middle School camping trip or host an elegant soiree - with equal aplomb?

Mme. Barcilon definitely had a certain "je ne sais quoi." My father, himself a chemistry professor, returned from one "Back-to-School-Night" to say, "Your Mme. Barcilon is something special. She had all the parents on the edge of their seats, shouting, "Bonjour, Monsieur Thibaut!!"

We will miss you, Madame!