In Memory of Lu Beale
by Judy Catlin 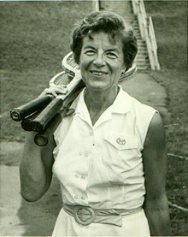 *10/18/04 It is with great sadness that we note that Lu died on October 6, 2004. However, we are pleased that the articles were published and shared with Lu before she passed away.

SERVING UP ACES AT SIDWELL

Lu Beale -- the name conjures up visions of a small, trim woman in tennis whites dashing to the net for a crosscourt smash. Or teaching her students, gathered behind the baseline, how to whip a perfect down-the-line winner. Lu Beale -- girls' tennis coach at Sidwell for almost 30 years. You all know her. But did you know that she considers herself more of a writer than an athlete? That she worked for many years at the Associated Press? That she was a fine skier? A
children's story writer? A wife and mother? A hiker with the Appalachian Trail Club? An afficionado of great literature? A mountain climber? Did you realize that we had a renaissance woman right here on Wisconsin Avenue?

Lucrece Hudgins was born in 1914 in Portsmouth, Virginia, where she grew up until her graduation from high school. Because schooling in Portsmouth ended after only 11 years in those days, Lu, as she has always been called, spent an additional year at Dana Hall, in the
Boston area. From there she won a scholarship to Wellesley College, majoring in English and graduating in 1937.

Soon after graduation, Lu gained a spot at The Boston Post as a feature writer, interviewing such diverse notables as Lady Astor, Arthur Fiedler, and Salavador Dali. Subsequently, she learned of an opening in the New York office of the Associated Press. It was there that she began her 27 year series of children's Christmas stories for the AP (one or two of which can now be found on the web). The much-awaited stories, in 17 chapters, usually revolved around the trials and tribulations of Santa in meeting his Christmas Eve deadline -- which, in the end, he always did.

In 1941 , Lu transferred to the AP Washington branch, a most fortuitous move, for it was there that she met her husband-to-be, William Beale (who died only 2 years ago at the age of 97!) She has remained here ever since, raising two children -- David and Mary, a Sidwell alumna, now a physician specializing in pediatrics and nephrology.

When Mary entered high school, Lu became friendly with Evelyn Fine, Director of Girls' Athletics. Lu had always been an outstanding tennis player, and Evelyn, with her fine eye for judging both athletic and people skills, offered her a job as tennis coach. It proved to be a wonderfully fruitful match for both -- a gifted new teacher for the school and an unexpected second career for Lu, who stayed on until 1981. She truly loved the girls, and they, in turn, speak of her fair and gentle spirit -- a quality not always prevalent among varsity athletic coaches.

But teaching tennis was not enough for the ever-adventurous Lu. At age 50, she took up skiing and didn't quit until age 86! For several years she belonged to the Ski Club of Washington, D.C. and wrote a series of articles on learning to ski at 50. Later she joined the Potomac Valley Ski Club where she was editor of the Potomac newsletter for 27 years and skied all the major mountain ranges of the United States and Europe. Hiking was another favorite, for Lu has always loved the outdoors, and enjoyed exploring the Catoctins, Sugar Loaf, and Old Rag with the Appalachian Trail Club. A special, yearly ritual (mostly successful) was trying to climb Mt. Washington -- on her birthday!

All this while raising two children and a dachshund. Always, Lu has had a dachshund. The other day, during a telephone conversation, her latest small friend, Josie, could be heard barking her opinions in the background.

Now, at age 90, Lu has been slowed down by various health problems, including macular degeneration. This has somewhat hampered her lifelong passion for reading, but she still enjoys books on tape. And she never tires of telling people about her affection for Sidwell Friends. She truly loved her time there -- her work, her fellow faculty members, and above all, her students. After attending school functions, she has often remarked, "They're not the best dressed kids, but they are the nicest."

OTHER TRIBUTES TO LU BEALE

"Lu Beale is one of the nicest persons I have ever had the pleasure to work with and a perfect lady. Totally dedicated to what she was doing, she loved teaching and she loved Sidwell Friends. Lu was wonderful with the girls. She coached a winning team almost every year she was with us! Because of her kindness and talent, the girls loved and respected her. Among her students were the Nixon daughters who invited her to the White House on a number of occasions. Not only was she a great tennis coach but she was and is my friend -- a friendship I value very much.

Lu loved the out-of-doors. She belonged to the Washington Ski Club and went on many trips with them. She had other talents as well, among which was writing children's Christmas stories which I loved to read. Children who were not exposed to them missed some wonderful tales. I was delighted that she and I had the opportunity to see each other and catch up on old times at the last retirees' luncheon."

(as told to Peggy Kane)

I was a young teacher just beginning my career when I first met Lu. I can still clearly picture her coming into Evelyn Fine's office every morning in her crisp white tennis dress and white sweater. Lu was a wonderful person with a good sense of humor. She had a special quality which is hard to verbalize -- kind, considerate, motherly, very good with the kids. I could always talk to her and frequently asked her advice because there was a comfort level with her that invited trust. I realize now that I tried to model my teaching relationships on hers.

My specialty and talent lay in field hockey, but I decided that I wanted to learn how to play tennis. Lu would often give me tips, as she and Evelyn and I and one other person whom I can't remember played doubles. Lu finally suggested that I trade stringing rackets for lessons with Pauline Betz Addie, the former Wimbleton champion who ran the tennis camp and club. That was typical of her. As good as her own tennis skills were, she passed me on to the master.

Belated 90th BIRTHDAY!!!!!! Clearly, it's because of all that healthy living! When I first started at Sidwell you were a mentor and friend. You were so professional and great with the kids. I remember you'd pop in before class and tell us some great stories about skiing, hiking or your world travels. We loved seeing" Pretzel " your dachshund (I hope that was his name??). Thank you, Lu, for being a wonderful role model, a great teacher, and one of the greatest people I've ever known. Thanks for all you gave back in life. You will be rewarded in heaven. Put a good word in for me when you get there!!!

With love and fond memories,

Lu had great teams during her career because she was a great coach. Her own athletic prowess helped her to understand the game of tennis and allowed her to pass on her insights to her students. On the numerous occasions that I visited her house, I realized that it was more like a trophy case. She had won so many tennis tournaments at the Chevy Chase Club! Plus she had a lot of trophies from other sports also.

Lu liked to hike and ski. She would have been a great person to have on Fear Factor or the Survivor Show. She was one tough competitor and a great friend. I remember one situation from those days. We were coaching the 7th and 8th grade boys' tennis team. We went down to St. Albans. I walked over with the tennis team, while she drove her car. When the match was over, the players started walking home and I did not see Lu and thought she had gone with them. As we all know, she liked to climb mountains and hike so that kind of a walk was nothing to her. I was the last one at St. Albans, saw her keys in the car, so I drove it back to Sidwell. But, guess what? She had not left with the boys, so she thought her car had been stolen. She was a little upset, but not really. When she said her car was gone, everyone thought she was joking since she had a great sense of humor. Thank goodness for me.

Overall, Lu is a great person and was a great person to work with at Sidwell - a real classy lady with a lot of style on and off the tennis court. I am glad to be her friend.

I first met Lu Beale in 1969 when Evelyn Fine hired me that January to fill an unexpected second semester vacancy on the girls' physical education staff. During that semester Lu became a valued colleague, friend, and mentor. As a new teacher just out of college, I had very little confidence and Lu was one of the people I regularly turned to for advice and support. She was always wise in her counsel.

Beyond helping me to grow as a teacher and coach, Lu also helped me mature as a person. My wedding was scheduled for June of that year, and I remember spending many hours talking with Lu about the challenges ahead as I entered into that new phase of my life. I remember fondly that there were more than a few times when Lu helped calm my "pre-wedding jitters."

My other memories of Lu go back to the period from 1978-1983 when the boys' and girls' PE departments were merged and I served as the first Director of Physical Education & Athletics for the joint department. There were many tensions during that time as new sports were added and some sports were moved to different seasons. One of the major changes was that girls' varsity & JV tennis was moved to the fall. Lu was the coach of the girls' varsity at the time, and I was always thankful that she adapted so easily to the changes.

Above all, Lu was always incredibly gracious and kind and a wonderful "team player."