In Memory of Melva Hiatt
Interviewed by Linda Schlafman 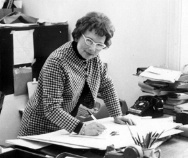 The door to the garden apartment at Asbury Village was wide open. This should have been a clue to Peggy and me. We knocked and called "Hello!" From her bedroom, Melva Hiatt answered, "Come in, I'll just be a minute!" And there she was, dressed in a red blouse and a flowered skirt. Her silver white hair was curled neatly atop her head. One could not help but notice her beautiful alabaster skin and her lovely green eyes. She was open, vivacious, and charming. Her ability to handle situations, as she must have done many times in her role as Administrative Assistant to four Sidwell Friends heads of school, was immediately evident. Of course the door was open! She was expecting us. This was her way of saying, "Come in and make yourself comfortable!"

Melva welcomed us cheerily as she moved deftly around her living room. First, she reached into a corner to turn on a chandelier one of her children had constructed of clear plastic cups illuminated by Christmas lights. The light glowed on a room overflowing with comfortable furniture, carefully framed works of art, and a cache of fond memories. I couldn't help thinking that the sparking lights were a reflection of her.

Melva Hiatt is amazing! All of the artwork that decorates the walls is hers! And, she is still taking classes at Montgomery College. In addition, she plays the organ that is prominently positioned in the middle of the living room. While serving on the Asbury Village staff of Village Life, she was on the curriculum committee for their Keese School of Continuing Education. She also performs in the residents' talent shows called Campus Capers. In her spare time, Melva makes most of her own clothes. Her sewing machine is in the den, behind files of memories of her travels to the Middle East. "It's hard to move from a four- bedroom house into a one- bedroom apartment," Melva explains. For most people this is true, but for this Renaissance woman, it had to be impossible.

Melva Hiatt, a mother, grandmother, and great-grandmother, was born to Quaker parents on a farm in Oskaloosa, Iowa. This part of her life is represented in a painting that hangs prominently over her desk. The painting, Melva explains, is of her mother's four passions: home, the chicken farm, flowers, and her four daughters. The horse Melva used to ride to school can also be seen peeking out of the barn door in her charming collage of childhood memories. In the painting, Melva's mother is shown feeding baby chicks. Melva explains that her mother took a course to learn how to raise chickens. Each day, during their incubation period, her mother carefully turned a thousand eggs, so that her baby chickens would develop properly.

Melva attended William Penn College in the early 1930's and after college got a job managing a Friends book supply business. Family friends introduced her to her first husband. She met him on a Friday. By Sunday evening they were engaged. Melva observed that she knew as soon as she met him that he was the one for her. After their marriage, the couple moved to Washington, D.C. There Melva worked for the National Education Association until she began to have children. When the youngest of the three entered kindergarten, Melva returned to work, taking a position as Administrative Assistant to Bob Lyle, Headmaster of Sidwell Friends School. She continued to work with three subsequent heads of school: Jack Colbaugh, Frank Barger, and Bob Smith. When asked to describe her job, Melva gave an example: Once, after reading a letter, Bob Lyle asked if he had written it or had she? "I did!" she replied! "It sounds like me," Bob remarked. It is clear that, like the fabulous women who have followed her, Melva was clearly in charge. She still is!

All three of the Hiatt children attended Sidwell. The eldest, Fred, is now a doctor of psychiatry at The Presidio Hospital in San Francisco. Joe is an anthropologist who was a Fulbright scholar and studied in the Middle East. He lives locally and is a great help to Melva. Roseanne is an educational administrator, heading the Literature and Language Arts Department for the State of New Jersey.

During Melva's long tenure at Sidwell, the land for the Lower School on Edgemoor Lane was purchased and the Sidwell student body was integrated. When asked whether there was opposition to integration, she looked at us and said, "That didn't matter. It was the right thing to do, so we did it." She fondly remembers colleagues such as Alice Dater and high school English teacher, Jef Forsythe. She also has fond memories of little Charlie Gibson who is now the host of ABC's Good Morning America!

Melva's first husband died after they had been married only nineteen years. She was married to her second husband, Eli, for twenty-one years. She and Eli also clicked right away. "I think I'm the kind of person who just knows immediately if something is going to work!"

Eli was a colonel in the Air Force, and the couple traveled extensively. Melva treasures those adventures, and she proudly showed us her favorite painting of the place she and her husband stayed while visiting their son, Joe, in Jordan. Details of the painting include the cement house they lived in.

This ability to remember, to organize, and to be aware of details must have served Melva well in her career. It still does. Dinnertime drew near. Melva called the dining room to say she would be late, and she asked that her dinner be saved for her. We offered to walk up to the dining room with her. Melva agreed, but first she combed her hair, refreshed her lipstick, and put on her pierced earrings without looking in a mirror!

Then Peggy and I struggled to keep up while Melva hurried to the dining room. As we moved through the halls, I reminded Melva that she had told me of her mother?s four passions. I asked her to list her passions. "Oh, everything!" she answered, and then she continued with her commentary on the landscaped areas we passed. She remembered the name of the landscape architect who had designed them and the Latin names of various plants!

After thanking Melva Hiatt for a wonderful afternoon, Peggy and I, in total awe of this woman's abilities and her active mind, struggled to find our way back to the parking lot