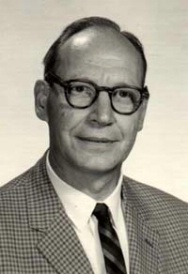 As School Archivist, I had heard and read great things about Hall Katzenbach. A former headmaster referred to Hall in writing "Few among us have his gift of word and phrase or his intellectual resilience. None of us is faster in wit or kinder in spirit." Another former headmaster referred to him as one of Sidwell's "most valued faculty members." Alumni remembered (and continue to remember) him fondly. In an article about Hall (or Mr. K, as he was nicknamed by students) in the winter 1966 issue of The Sidwell Friends School Bulletin, it is noted that alumni "recall a tall, articulate man, a thoughtful listener; intense, serious, but capable of a certain erudite humor - much of it at his own expense; meticulous in detail; an ever-present aura of scholarship." Susan Banker, a current English teacher who was hired by Hall when he was principal of the Upper School, recalls with great happiness the discussions that she and he had about literature. In a telephone conversation with me earlier this spring, she marveled at his knowledge of great works and his rapport with students; she remarked that he was "born a teacher."

Hall Katzenbach had accomplished great things in his forty-two years at Sidwell Friends. He had taught English to hundreds, and perhaps even thousands, of students;
served as Dean of Boys, teacher of dramatics, and coach of the varsity soccer team early in his career; as founder of the first cross country team in 1962; as Upper School Principal from 1965 through 1972; as Coordinator of Curriculum Development; and as chairman of the English Department in 1978 and 1979. In addition, he served as faculty adviser to the Quarterly, a publication with which he knew he wanted to be connected as early as his first visit to the School in 1942.

On March 9 of this year, I had the good fortune to meet H. Hall Katzenbach, Jr. in person. As soon as Ele Carpenter and Peggy Kane had suggested that he might be interviewed, I became excited about the prospect of talking with someone who has such a rich and historical connection with Sidwell Friends. I would be meeting the Hall Katzenbach. After having announced from the first floor of his building that we had arrived a little early, Ele and I were encouraged by Hall to come right up. He greeted us with a big smile and a hearty welcome. Any nervousness that I had experienced was laid to rest. I introduced myself, and then I asked again if it would be acceptable if I recorded him. He said that this would be fine.

As I listen to the tape again, I am reminded of what a remarkable 93-year-old Hall is. During the interview, Ele commented that his voice hasn't changed a bit. I also think it safe to report that his enthusiasm for literature, education, and life hasn't become any less great either. His energy is contagious. The excitement with which he recalled, for example, the JERP, or Junior English Research Paper -- a project which he introduced in 1946 -- was stimulating and inspiring. It seemed that even now he is invested in it. This was very important work indeed; not a student was unprepared when it came to writing term papers in college. Hall encouraged them to delve into topics that were specific to their interests, and he fostered their research skills at the Library of Congress, no less.

We listened attentively and with admiration as Hall told us of his own formal education and his decision to pursue English and teaching. We listened excitedly as he told of how he had first taught in the Sidwell House, of how he was one of just two English teachers -- the other being Virginia White, the "head" of the English department -- when he arrived, and of how the most challenging part of soccer practice was dodging the streetcar and other traffic to reach the former playing fields (now Fannie Mae) on the other side of Wisconsin Avenue. As he patiently answered our queries, I found myself becoming more knowledgeable about Sidwell Friends history than I would otherwise have been.

In a letter to Albert E. Rodgers dated June 2, 1942, Hall Katzenbach accepted the offer to teach English at the Sidwell Friends School and wrote "I shall do all that I can to teach well and loyally to further the aims of the school. I shall be happy doing this." Having read and heard about Hall and later had the opportunity to speak with him directly, there is no doubt in my mind that he was a successful in accomplishing what he set out to do nearly sixty-one years ago. He enriched the lives of countless students (and colleagues as well) in serving as a teacher, a mentor, a role model, and a friend. He provided his students with the tools that they needed to become solid writers, avid readers, steadfast learners, enthusiastic actors, strong athletes, and first-rate individuals.

To My Friend Hall Katzenbach
by Anne L. Yondorf
Written in 1984

Modesty is the rare mark of great accomplishment. Hall Katzenbach is modest to a disarming degree. He is a gentleman above reproach; his gentleness is a sign of strength, and no rebuke has ever struck his figure.

His courtly presence invites a deferential fondness and admiration from his class. Politeness becomes him as does dew the morn. Rejecting a narrow and prim view of pedagogy, he prefers to widen the horizon of every student. Never tethered by a string of lifeless rules, he makes of grammar a feast of brilliant offerings useful to the fastidious and the fervent writer alike.

Hall stands tall as one who has discerned that true understanding invites self-doubt, that no judgment is final, and that all learning is a kind of undiminished growth.

Hall knows that learning is best accomplished when the unknown is presented as an invitation to the ball. The expectation of adventure outweighs consideration of a test or grade. In his hands an examination, rather than inspiring dread, becomes the reflection of each learner's self-expression.

Hall's delight in poetry and prose, his penchant for the witty phrase, and his enduring approval and understanding of the young make him the most endearing member of Sidwell Friends. (Spring 1984 Alumni Bulletin)

"Everyone knew Hall Katzenbach. You'd watch him shuffling down the hall because he was a legend; an uncompromising, adamant genius who, the older students said, knew everything about literature. But he also knew when to wave his finger in the air upon reading Hamlet's soliloquies; he knew how to rage as well as any American when reading Dylan Thomas; he knew how to care about workers when reading Carl Sandburg; and he knew when to pause, when to dab a tear from his eye when conveying the vision of a poet named Emily Dickinson who, he said, did nothing more than write a poem a day. His passion was contagious, his intellect invincible, his taste exquisite. Hall Katzenbach will live forever because we will always hear the lilt, the fire and the compassion of his voice in ours." (JoAnne Lanouette included this quotation in announcing on June 11, 1998 that the English award would be in Hall Katzenbach's name. The quotation also appears in the 1997 Alumni Directory.