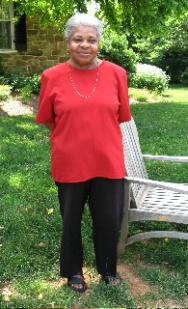 Can we sufficiently comprehend a life that literally devoted 44 years to serving others? Ruby Whitfield did just that in the dining halls of Sidwell Friends School.

Born a sickly child in Columbus, Mississippi, Ruby grew up with her two brothers and two sisters. At an early age she was taken first to an aunt in Pittsburgh, then to an aunt in Washington, DC to receive individual care. As she neared her adulthood here in DC, Ruby daily shared a bus trip with friend, Evelyn Williams, who persuaded her to come work in the Sidwell dining room. That was 1963.

At Sidwell, Ruby gave her constant smile and her loving care to everyone and to her work. Her first supervisor was the infamous Marty Moffitt. Ruby prepared and served meals along side of Vera Campbell, Bernard Woods, Almira Anderson, Addie Glazee, Ruth Brown, Etta Porlock and the memorable Ernest Billings among others. Ruby’s sister, Linda, even served with her for three years.

“Back then” meals were prepared family style – a teacher at the head of a table with students assigned from each of the grades, 5th through 12th There was no dessert given to tables that did not complete the main course clean-up. And main course it was! Unforgettable entrees; Charley’s special – chunks of creamed chicken, fresh garden peas, rice and homemade dinner rolls with strawberry jam. That was the favorite, but homemade beef stew with fresh cornbread and syrup came close as did Spanish rice with strips of lean bacon.

Ruby’s daughter and best friend, Tasyha, relates that Ruby still “fusses” with food at home and she will chide Ruby with, “You’re not at work, Mom,” when Ruby overdoes it with the preparation.

The “early days” at SFS were “like family – togetherness, unity; made you feel good.” Ruby speaks of no regrets and many cherished memories. “Some I remember, and others…I remember.” And kids! “Lord, yes! Some still come to see me - and now with kids of their own.” Ruby prides herself on the fact that she and Ernest Billings were the only adults invited from Sidwell to Chelsea’s White House graduation party. “I loved that child. She’d seek me out at school and say, ‘Hug me!”

Ruby Whitfield! What a GEM! Aren’t we glad to have known her!