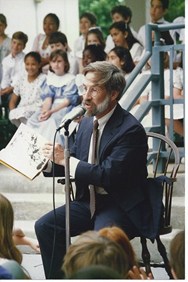 Maybe it was my one nice pair of jeans. Or the ten-year-old VW with its rusted undercarriage. Who knows? We were a match. His own heap, camping out in the faculty parking lot, would later attract a homeless man looking for a quiet place to sleep. When I walked into Rich’s office in 1978 and asked to be paid $3 an hour to sit with napping 4-year-olds, he looked at me shrewdly and smiled. I wanted to be a writer, and boldly suggested an additional post as creative writing teacher. He informed me that Sidwell Friends Lower School already had one. Amazing. One thing led to another, and before I knew it, I was hooked on Lower School.

For the next five years, until a permanent position became available, Rich dangled half-time openings and my partners taught me how to teach. He had a talent for providing support while upping the ante so incrementally you forgot he was in charge. Thirty plus years later, I remember the gleeful antics that sealed the deal for me:

Rich was a master at attracting ambitious, dedicated practitioners. With contacts throughout the country and an immense file of resumes squirreled away, he put great effort into enticing good teachers to Lower School. Once a prospective hire was seated in his office, he professed to have a simple process for evaluating candidates—“I ask myself if I’d like to sit beside this person on a cross-country flight.” His unorthodox approach regularly brought fresh talent and vision our way. To keep his faculty from growing stale, he encouraged exploration and movement. One year, half the staff changed teaching assignments. Rich allowed us to pull up stakes, to gamble on the unknown.

A Child in the Principal’s Office, Rich’s own account of his motives and methods, says a lot about him, but the title underplays the intelligence and vision that drove him to build an award-winning school. What really kept us grounded year after year was an optimistic, untarnished belief that we could do better. Better by the kids, better by ourselves. Curricular workshops, outside experts, national conferences and pet projects were the norm. I can’t think of a single instance where Rich said no to a pedagogical itch his teachers wanted to scratch. With our team-taught, multi-grade classroom structure, someone always had a new idea. Rich gave us permission to disregard the hidebound, align with proven best practices and then keep walking.

Like a sporty hybrid, Rich was an unabashed original. In an office filled with schoolroom memorabilia from bygone days, he stashed a photo of a far more hirsute self at Woodstock. Underneath his sometimes indecorous exterior, he was a paradigm shifter, a tenacious agent for change. As soon as they were published, he asked us to read A Hope in the Unseen, Why Are All the Black Kids Sitting Together in the Cafeteria?, anything that might help us envision a school more inclusive than the one he inherited. He spearheaded efforts to examine our curriculum, host diversity workshops, convene parent/ faculty discussion groups, pay a diversity coordinator and enroll a broader student body. His focus was unwavering, and he stretched himself to grow along with the school. Occasionally, we downed something set afire at Tia Queta to help us get through the hard parts. Life-changing. A sign on my desk reminds me, “If not now, then when? If not me, then who?”

Heading to Middle School after twenty-five years with Rich was just what he prepped me to do. And yes, whenever we meet up he needles me, ”So . . . ya still shopping at Traitor Joe’s? Don’t worry. I got your back.” He remains a headliner, someone who loves to rock the house, shake up the status quo. Of course, mistakes were made. I still find it challenging to explain to students why throwing dead fish into the audience in celebration of “Flounders Day” was so funny. But there you have it. He taught me that if you believe something is worth doing, why not get a kick out of it? At least, make it memorable. Thanks for the tips, boss. It’s been the flight of a lifetime.