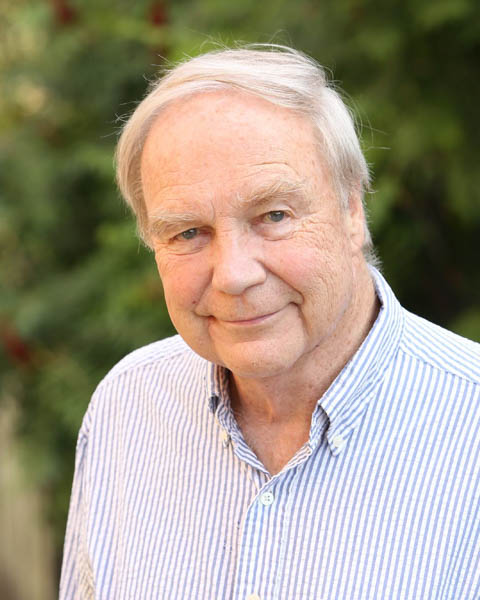 After writing a tribute for Ed’s retrospective art exhibition last year, I did not realize it would have such an enduring shelf life.  Recently asked to revisit my monologue for his re-retirement ceremonies and for this tribute, I am reminded how lucky we are to have Ed in our lives.

Ed Crow is one man in his time who played many parts.  For over half a century, he shepherded the Sidwell art program in a variety of ways: as the chair of the arts department, as a theatrical director, as a visual art teacher, as an English teacher, and as a friend to many.

The first time I met Ed Crow about 2 years ago, he was sitting on a barstool at Café Deluxe.  We were introduced by Sidwell colleagues and I have been intoxicated by his legend ever since.  His personality is what lured me at first, but over time it was the third person tributes to Ed that kept me coming back for more.  I heard mysterious stories of past summers spent in Europe touring with a band.  I saw surreal musings on cocktail napkins that evolved into theatrical productions.  I was shown rolls and rolls of his copious architectural renderings, and finally someone suggested that I feature his work in the art gallery.

I have since learned that Ed’s introduction to theater came at the hands of the carnies traveling through North Carolina.  One of his first jobs was to raise the Ferris wheels for the circus.  Ed is also an accomplished musician and drummer who earned his chops playing jazz gigs in Europe.  As a young man, Ed served in the Navy before settling in Washington, DC and rediscovering his passion for theater as a profession.  For a period of time he directed theater at St. Alban’s, National Cathedral School and Sidwell Friends, while also earning his Master’s Degree from Catholic University.

For fifty-four years Ed graced our school with his creativity and his artistic vision.  Generations of students have benefitted from his wisdom, while colleagues have enjoyed his mentorship.  His passion for theater is fueled by his breadth of talents.  Through music, with a paintbrush, and on the stage, Ed Crow is a modern day Renaissance Man.  His quiet presence has been a steady hand guiding the performing and visual arts programs at Sidwell Friends School for decades.  In addition to his knack for stage direction, Ed used to teach visual art classes as well.  His deft touch has been evidenced by the numerous sketches, watercolors, and designs he created while producing plays for two generations of theater students.

Did I forget to mention that Ed also taught Shakespeare?  I heard a story about students entranced by Ed’s ephemeral chalk drawings that he rendered on the blackboard while lecturing about the Bard’s scenes.  One might say that Ed Crow is just too much of a good thing.

At a Friends school, it would not be out of the ordinary to eschew acknowledgement of the accomplishments of our colleagues.  It is my hope in this case we have consensus that five decades of commitment to the arts at Sidwell is worthy of a modicum of adulation.  Please don’t let the slow shuffling of his footsteps or his quiet languid cadence fool you.  Ed Crow still has much on his mind, and he has even more to say.  Sometimes the most important job of the fourth wall is simply to sit quietly, to listen, and to behold.