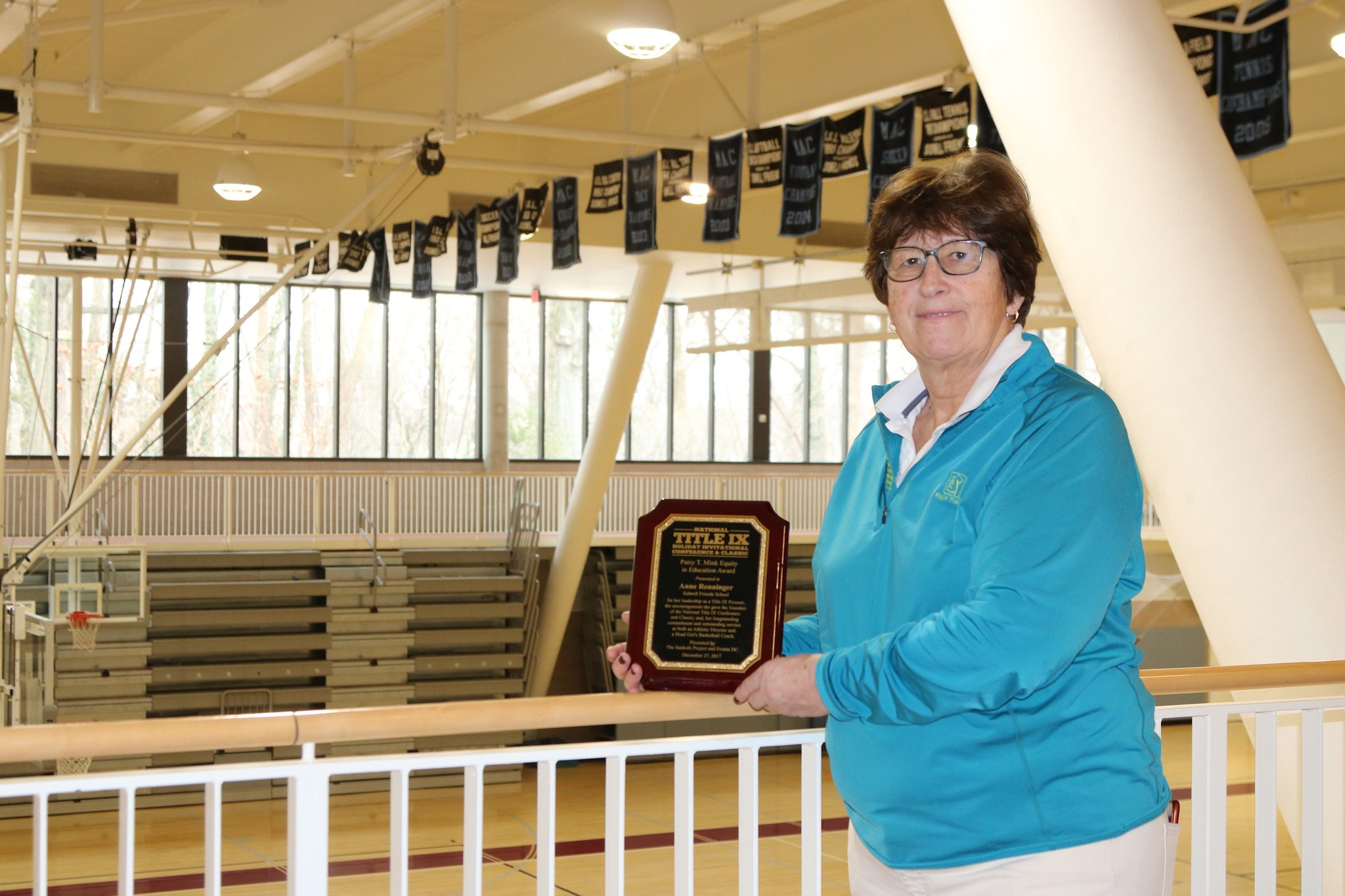 The award comes from the Patsy T. Mink foundation which is dedicated to furthering the work of former Congresswoman Patsy Mink (D-HI), who was one of the authors of the Title IX educational amendments of 1972. The law required equal opportunity regardless of gender in both education and in sports. Poff received the award for her work as a player and coach and for serving as one of the country’s first women sports administrators.

As a student athlete, Renninger played on the basketball, tennis and track teams at the University of Maryland. She even participated in the first ever nationally televised women's college basketball game in 1975. After graduating college, she became the youngest college basketball coach in the nation at George Washington University, and she started the women's program there from scratch.

After coaching at GW and William and Mary and then serving as an assistant coach at the University of Maryland, Poff found her true calling at Sidwell Friends. For 36 years she has been at the forefront of women’s sports programs here.

Poff explained that as an athlete, she always tried to serve as a “role model” and fought for girls to get equal playtime during the days when gyms had to be shared and girls teams would face discrimination. As a coach, she said she tried to make sure that girls had the same opportunities as boys in things like uniforms or in college scholarships.

“We set a good example here,” she said. As an administrator at a co-ed school, she was in a good position to make sure the school achieved equality between the girls and boys.

The progress that the country has made since the passage of Title IX amazed Poff. She observed that in 1972, when she was in college only 1 in 27 girls participated in a varsity sport. By 2011, however, that number had increased to about 2 in 5. “That’s a 600 percent increase,” she said.

However, a disparity still remains between boys and girls in sports. She noted that there are 60,000 fewer opportunities for girls to play sports than boys in the United States. In the past, a lot of schools didn't offer certain sports for girls, such as softball or baseball.

A major concern of coaches today is that the benefits of equal opportunities in sports are not reaching all communities equally. She said there was a great deal of socioeconomic diversity in two sports: basketball and track and field, where scholarships are more commonly available, but that it was not true in any other sport. Her primary concern now is expanding diversity across girls sports.

Poff has spent a lifetime dedicated to equal participation for women in sports, and this award represents recognition of her endless work. In fact, she sees her work in sports as translating into bigger even gains for the women who participate. She says studies show that playing sports in high school and college correlate highly with success in later life. In the past, only men got the advantages of sports, she noted. But with the opening up of opportunities for women, she said, they also get the same benefits that come from playing sports.

She has helped hundreds of girls over the years gain the equality that they were long denied before the passage of Title IX.