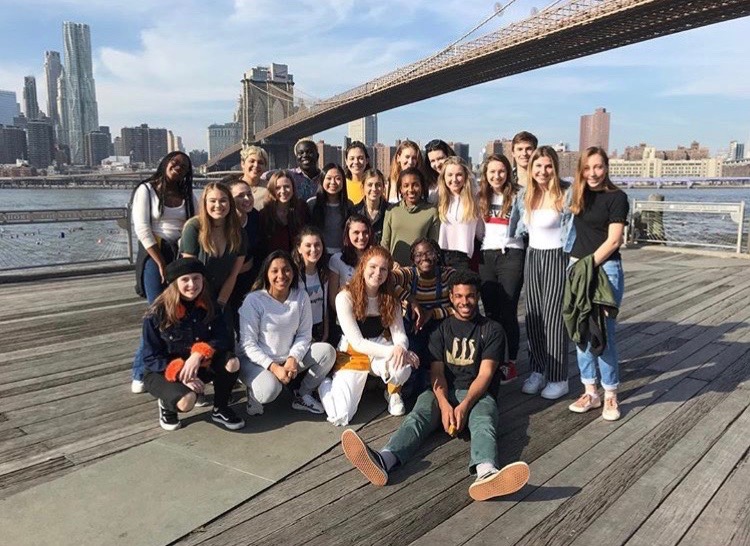 CITYterm is a unique “experience-based learning” program, according to senior Daniela Ilhan, who participated in the program in 2017. Over the course of one semester, students gain first-hand experience in New York City, while participating in classes specialized in urban life and forming lasting relationships with their peers.

CITYterm brings together about thirty students from all around the country - Texas, Massachusetts, California and Hawaii, to name a few -  who all live together on the campus of a boarding school called The Master School., located about thirty minutes from the city. The students commute by train for their in-city lessons.

CITYterm offers a different approach to learning than the more traditional methods offered at Sidwell Friends School. “We do have some classes based in a classroom,” Ilhan said, “but a lot of the time we are using New York City as our classroom… We’ll go into the city every other day of the week for class and we’ll do something based on whatever we’re learning in the city.”

Students on CITYterm can also pick two additional courses on top of the Urban Core. The selections include more traditional classes, such as math and language, but also New-York based science. “[In] all the science we do, we use New York City as our lab,” said junior Jacqueline Grimson, who left for CITYterm on Jan. 25. The teaching style is generally more focused on student-led discussions and “revolves around leaving the classroom,” said junior Elizabeth Irvin, who is also currently participating in CITYterm.

This hands-on experience is what appeals to many of CITYterm’s participants. Grimson described her decision-making process by saying, “I think just from hearing about it from other kids, it was just a different learning experience from what we have at Sidwell.”

Irvin agreed that CITYterm provides a different learning method and change of environment: “I don't think Sidwell has the best structure for my style of learning. I don't learn particularly well in a lecture setting, and unfortunately that’s what a lot of my classes [at Sidwell] look like...The program really appealed to me because of the interdisciplinary aspect. Like I said, it’s difficult for me to absorb information and pay attention while being talked at, so I love that CITYterm revolves around leaving the classroom and focuses on experience-based learning.”

Additionally, CITYterm is a way to experience New York City firsthand. “I thought it would be a really great experience because I already love New York,” Grimson said. CITYterm allows students not originally from the city to become acquainted with city life.

According to Ilhan, participants have “a ton of free time. On the weekends you just go into the city and do whatever you want, and you’re on your own in the city. It’s really awesome, and you… get to know New York so well… You know it like the back of your hand by the end. So you know the subway routes to get from place to place… If you told me a specific place [in New York City], two specific places, I could tell you the subway lines you need to take to get there.”

In addition to exciting experiences, CITYterm can foster lasting friendships. Ilhan is still in touch with many of her peers from the program, and, after a recent visit with one of her friends, intends to stay with her former roommate in Texas for Presidents’ Day weekend.

“You make friends for a lifetime,” Ilhan said.

Of the program as a whole, Ilhan said, “I think anyone who’s considering should definitely do it. It was honestly such a life-changing experience. It changed the way that I looked at learning.”